How Will You Die When SHTF?

Death in and of itself is a scary proposition.

As humans have struggled to understand death they’ve created stories, religions, gods, and underworlds to explain the unknown. Every civilization has both worshipped and feared death.

But no matter what happens in the afterlife, one thing is irrefutable … death is inevitable.

And if – or when – Shit Hits The Fan (SHTF) it’s almost guaranteed that there will be a lot of death.

Do I wish that everyone could survive a doomsday SHTF cataclysmic event?

Now back to the topic of how you’ll die …

I’ve put a little thought into the topic of how people will die when SHTF and I’ve come up with the top likely causes of death after a doomsday type event. Keep in mind there are many different scenarios for a SHTF event, and I’m no Nostradamus … but I’ll try.

Top Causes of Your Demise

1. People who don’t value your life as much as you do.

When social chaos ensues, and the rule of law is thrown to the wayside it’s likely that there will be a lot of killing. Even if it doesn’t start right away people will get desperate and will likely kill for just about anything. I’d like to think I’d never kill for a snickers bar … but who knows when it’s a life or death situation.

Plus when society breaks down people will do whatever they want with little regard to the value of human life. Violent deaths at the hands of others will become commonplace. We’ve been controlled for our whole lives, get rid of that control and people are going to act out in crazy ways.

2. Starvation and dehydration for the masses.

Starvation and dehydration will be very common causes of death in a doomsday situation. The food supplies are limited. Hell, when you think about it the grocery store is wiped out in one day when a decent snowstorm is on the way. Imagine a situation where there is no re-supply!

Plus once the bottled water, or other clean water supplies are depleted people may struggle with finding enough water to survive. In some parts of the world water is already hard to come by.

Think you have a healthy immune system? Just wait until there is no waste disposal or easily obtained medical attention. After an event it should be expected for diseases and conditions we’ve forgotten about to come back with a vengeance.

5. Suicide may become an everyday thought.

I got hooked early on with AMC’s series The Walking Dead. And they don’t really shy away from the topic of suicide. There have been many, many episodes where they show the aftermath a suicide, or murder/suicide scene in order to turn up the emotional dial.

In an apocalyptic situation there are likely many who will choose to take the easy way out. Will you be one?

If you have a minor accident today that results in a little injury you likely aren’t that concerned. A simple bandage and antibiotic ointment usually will have you patched back up in no time. And if it doesn’t heal well there’s always readily available medical treatment. 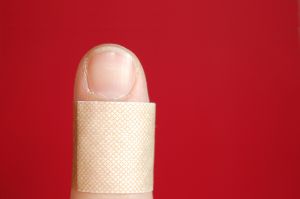 But if you can’t properly treat a wound and keep it clean it’s easy for an infection to set in. A simple wound infection can fester and lead to a total body infection that can quickly lead to death.

Looking through old death records from the turn of the century should definitely inspire any prepper to learn to treat simple illnesses such as the cold. But back then many death records just listed “fever” as cause of death.

Recently on a road trip my wife and I stopped by a civil war site and found an old cemetery from that period. On one of the gravestones it simply said “Baby Girl, died of fever” and then listed the date of 1865.

During the late 1950s through the 1960s the cold war was in full swing. And families all over the United States were preparing for the possibility of a nuclear attack. The reality really sank in with the Cuban Missile Crisis. Nuclear fallout bunkers and fallout shelters were commonplace. In the downtown area of Greenville, TX, the county seat for my county there are fallout shelter signs still visible in the courthouse and the walls of random buildings. Bunkers are making a comeback.

If you’re close enough to the epicenter then you’ll be lucky enough to be instantly turned into dust. But if you’re far enough away to survive initially you may get radiation poisoning and suffer a slow painful death.

If society breaks down and the lights go off the night will once again belong to the wild. But it’s not a high statistical chance that a wild animal will get you.

The biggest concern about becoming animal food after SHTF is the formerly domesticated animals. Dogs that turn feral can be extremely aggressive – especially when starving – and don’t have as much fear of humans. Granted over time this threat should lessen as the dogs starve to death.

During times of extreme famine it’s not uncommon for people to consume the flesh of other humans. Scientists who have studied cannibalism have even ingested human flesh to understand cannibalism better. Human flesh is said to taste much like veal, but just a little stringier.

Cannibalism is still practiced today in some of the most remote corners of the world but usually because of a religious or societal belief.

Desperation is why I think cannibalism could be a threat when SHTF.

In Russia and the Ukraine in the early 1920s there was a far reaching famine and for many people cannibalism became the only way to survive.

So in a post-apocalyptic society beware of people who may want to eat you! They will be the true flesh-eating zombies.

But How Will I Die?

Of course I don’t plan on dying. I have plans and careful preparations put in place. I’d like to die of advanced age peacefully. But the most likely scenario I see for my death is the threat of other humans who want what I have. I won’t go down without a fight however.

The other most likely scenario would be from illness. With little to no access to modern medicine it’s a good chance that’s what’ll get me if something does.

How do you think you’ll die after SHTF? Are there any likely possibilities I’ve missed? Let me know by commenting below.